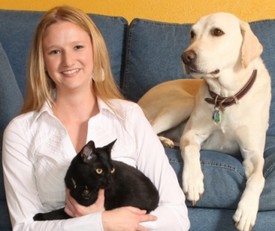 Dr. Taylor Carl graduated from the Texas A&M University College of Veterinary Medicine in 2012, where she also received her bachelor’s degree in Biomedical Sciences.

Dr. Carl enjoys spending time outdoors snowboarding, wake boarding and relaxing with her family at their ranch in the Texas Hill Country. Dr. Carl loves to get to know new families and their pets. She is especially interested in internal medicine, particularly oncology and feline medicine.

Dr. Carl lives in Richardson with her cat and dog. 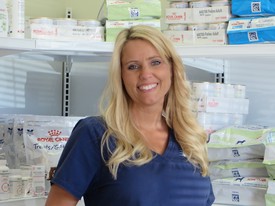 Cyndi Poole joined Buckingham Plano Road Veterinary Clinic as the Practice Manager in 2015. She shares her house with three kitties, Earl, Bubba Jeff and their little brother Frankie. Everyone knows when the kitties come into the clinic, you better tell Cyndi so she can get some kitty love. Although Cyndi has moved to Little Elm, Texas with her husband Mark, she 100% believes the great team here at the clinic and their clients are worth the drive and traffic. When not at work she enjoys Forensic shows, constantly posting pictures of her cats on Facebook to share with the world or texting said pictures to coworkers as well. She has a big blended family consisting of 7 children and 1 grandson who keep her life full. 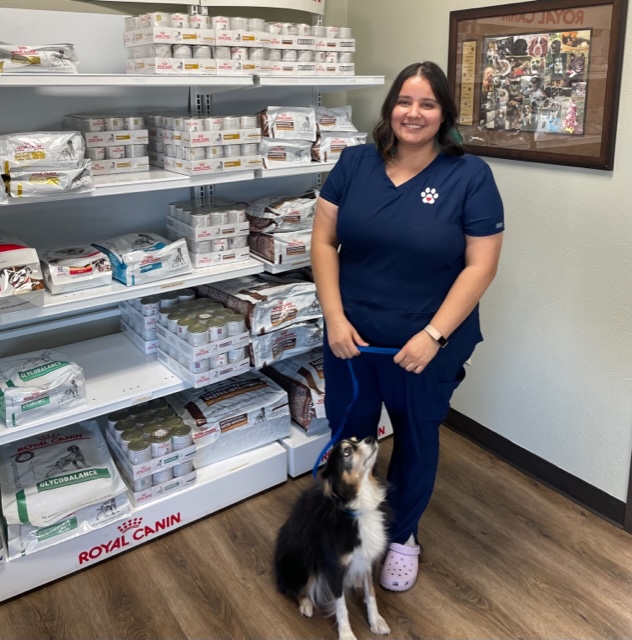 Connie has been with the clinic since 2008. She has a chi-weenie named Primrose, whose mom was rescued by Dr. Lorenz in 2012 when she was pregnant. When the puppies were born, it was love at first sight for Connie & Prim, they are inseparable! However, history repeats itself, and in January of 2016 Dr. Lorenz rescued a sweet pregnant pit bull in an emergency situation, delivered the puppies, and Connie adopted one of the 6 that survived. Now Prim has a big “little” sister named Penelope who loves to snuggle with her! Connie enjoys a hot cup of coffee, K-pop and Korean Dramas and LOVES going to concerts. 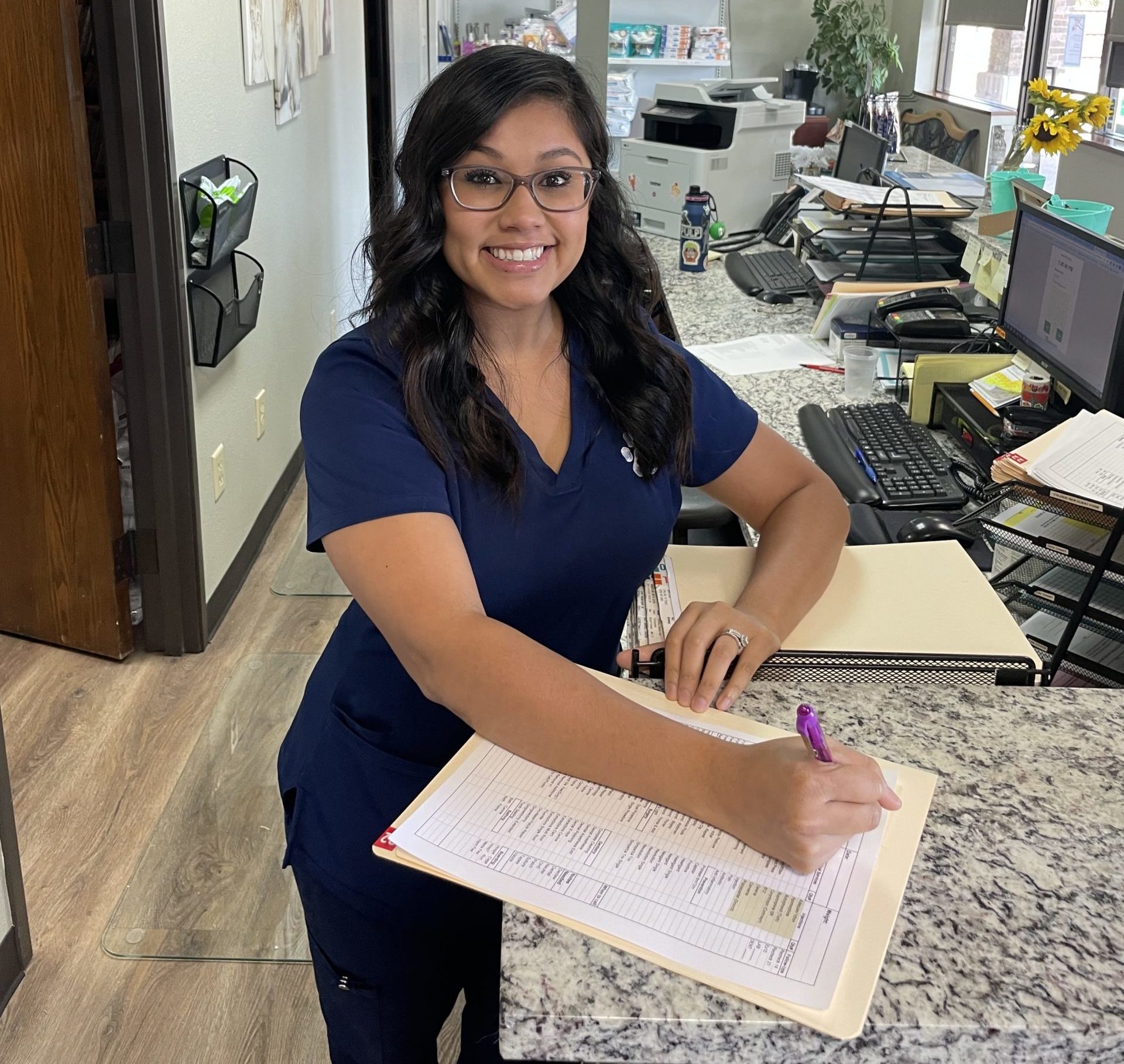 Amanda joined our clinic in October 2016 because of her love for animals. She has a mixed breed puppy named Chester and a Rottweiler named Roxie. Amanda has expanded her family since starting at the clinic adding two precious boys, Tristan and Jaxon AKA Bubba and Jack Jack! We are very happy to have Amanda as a part of our team. You will find her at the front desk greeting everyone with a warm smile. 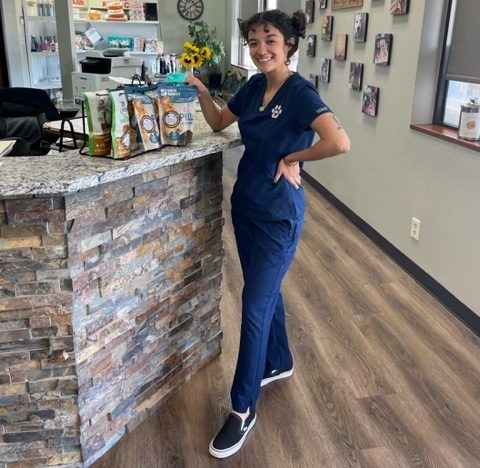 Angelina was born in Dallas, and moved around a lot as an adolescent. She lived a few years in south Texas and graduated high school in 2019 from Arkansas. She has one fur baby named Kylo Ren, a sweetblack kitty kat.

Angelina spends the majority of her time either at work or the gym. Going on stroller walks with Kylo almost every Saturday is enjoyable for her. She has a passion for acrylic painting and mixing her own fun colors. She aspires to be a Veterinarian but will use this time to learn the ways of a Vet Technician! 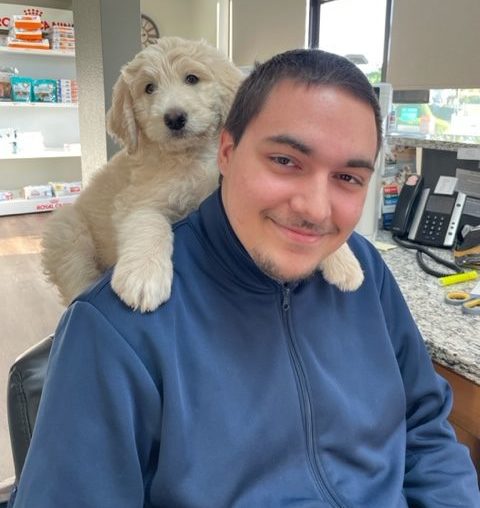 Gannon joined our family in early September 2022. You will find him behind the front desk greeting our patients and pet parents. Helping others has always been a quality this young man has had and we are excited that he will be here passing along the family atmosphere that we always strive to provide to our clients. He grew up in a family with a belief that pets are family, so this is the perfect place for him. When he moved out on his own, he adopted Stache, a Siamese, with half of a white mustache and full of more personalities than he knows what to do with. Stache was given the task of being by his side each day when

Gannon was diagnosed with Hodgkin’s Lymphoma at the beginning of 2022. He is now in remission with great health and is excited to finally get his foot in the door to work with us. When he is not at work, he spends a lot of quality time with his family when he isn’t behind the computer playing games of course. 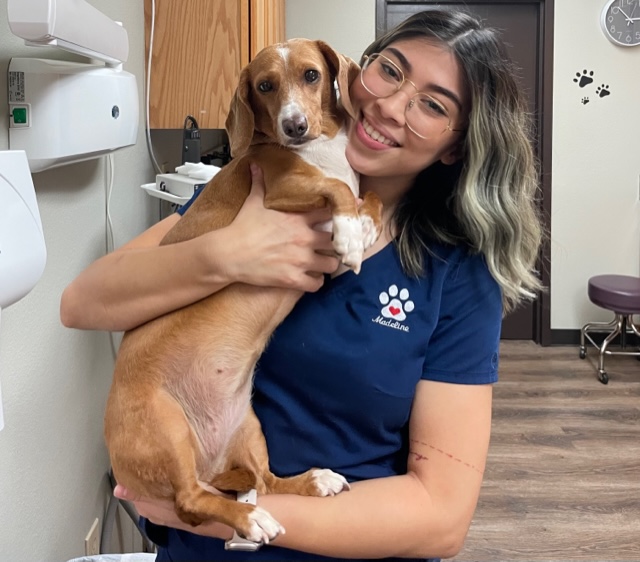 Madeline joined the Buck-a-roo family in 2014. She and her husband are proud parents of 3 fur babies; Sadie, Molly (2 beautiful German Shepherds) and Jake from State Farm (the lovely chi-weenie). She is our expert photographer and social media specialist. She has recently ventured out and started her very own Photography business in 2021 and is thriving! When she is not helping our wonderful clients and their pets, you can find her traveling the world or at local vegan restaurants! 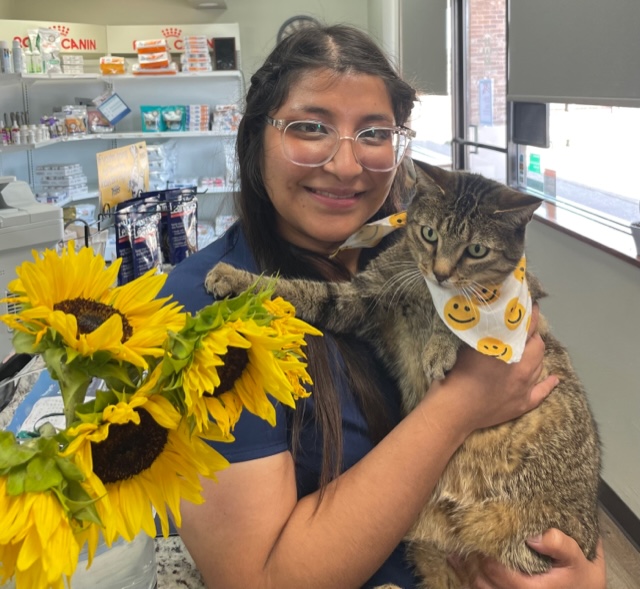 Viviana, or just “V” as we know her, has been working at BPRVC since June 2019. She has four fur babies, Snow (a Catahoula Leopard mix), Kiba (a Chiweenie), Pulgoso (a pit mix), and Simba (an orange tabby). In November of 2021 she welcomed her son, baby Seth, extending her mommy duties! When V takes off her mom-hat, she enjoys going to many K-pop concerts, Anime Conventions or just relax at home watching Animes! 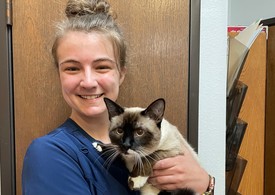 Steffanie, also known as “Steff”, joined our Buck-a-roo family in 2019. She is graduating with her bachelors in Animal Science from Texas A&M at University-Commerce and will be pursuing her masters in Agricultural Science. She has two rambunctious Chihuahuas named Prince and Shadow. A new addition was added to her family just recently- a very spunky Catahoula named Chloe. Coffee has been her main source of energy these days! 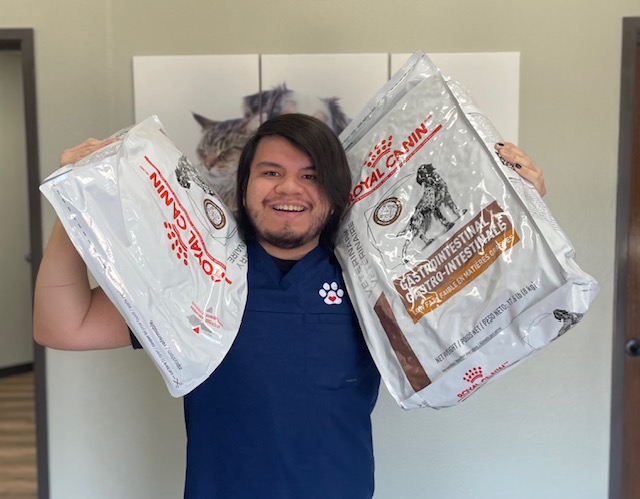 Bryan came to us back in 2015 at only 16 years old. Though he left us for a time, he has returned back to our clinic family to continue helping pets. He continues to further his education to one day pursue a career in Forensics. In the meantime, he is here to help with your pets’ needs! 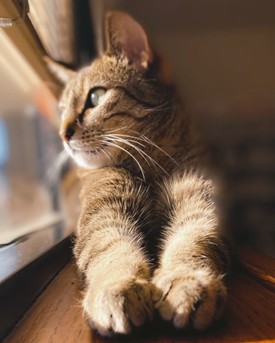 Bobbi was born in Dekalb, Texas and was hanging out at the tire store with all the guys when Dr. Lorenz popped in to get tires. When he spotted this cute little kitten with only half a tail, he asked if he could have her. The answer was YES and he not only purchased tires that day, but got himself a free little kitten. She went on to live at the Lorenz Manner for many years until she came to work at the clinic as our #1 Feline Security Specialist. Just because you may not see her up front, doesn’t mean she isn’t watching you as she takes her job very seriously. Do not let the extra sweet, got to rub myself all over people act fool you, she is on duty and is making note of your smell and appearance as well the company you brought with you. She never forgets a face! She isn’t always on the up and up though, as she does take treat bribes on a regular basis.